A Backgrounder on Human-Wildlife Conflict in Rajasthan 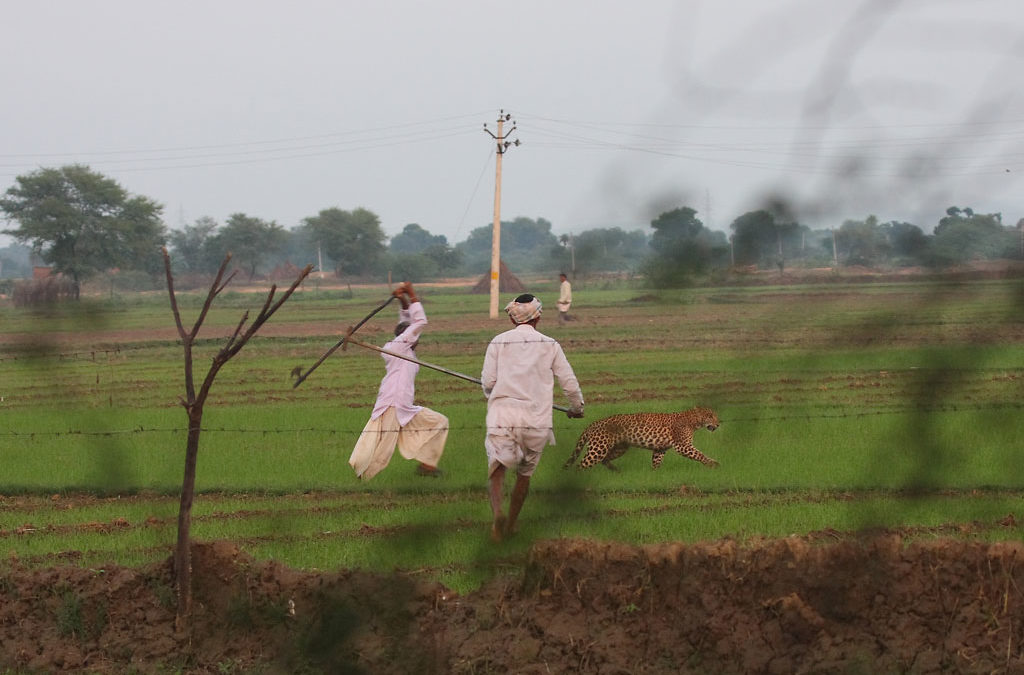 In a remote corner of Rajasthan, we went to explore places and facts forgotten by history. We worked our way down a deep gorge of the Vindhyan plateau, and up on the escarpment was a prehistoric human shelter, which had a pictograph of a tiger. The blood-red hematite ore rock art panel not only depicted the tiger, but also the context of that period. The tiger was surrounded and attacked by a band of humans with bows and arrows, who were perhaps trying to protect their livestock or even themselves. The scene depicted in this pre-historic cave remains the same in the present era, but now human-wildlife conflict (HWC) is no longer just a battle of survival between humans and wildlife. It is, many a time, man-made, and most of the time, perceived incorrectly. The new defining concern is that we have to save the very same species with which we have been in conflict. It is better that we quickly realize that these species are essential for our own long-term survival. Their existence is essential to maintain our precious ecosystems, and it is the services of these ecosystems on which our existence is dependent.

Rajasthan is the largest state in India, and covers 10.5% of the total area in our country. Most of its protected areas (PAs), totalling 3.2% of the extent of the state, are located in the hilly areas of the Aravalli and Vindhyan ranges, while just two sites are situated in the desert areas of the state. Rajasthan’s economy is primarily reliant on agriculture and the rearing of livestock. About 50% of the state’s area comes under cultivation; it stands second in the rearing of livestock and the first in rearing goats. There are 2 sides to Human-wildlife conflict in Rajasthan – one where there is a direct threat to human or animal life, and the other adversely impacting human economy or animal habitats.

Rajasthan is a challenging agronomical landscape for farmers as most of its agriculture (75%) is rain-fed and based on the erratic monsoon. Crop-raiding animals only aggravate the already bleak situation. The state has the maximum number of potential crop-raiding species existing outside PAs in the country, comprising antelopes (Nilgai, Chinkara, and Blackbuck), Wild Boar, primates (langurs), canids (Golden Jackal, Desert Fox), and Indian Peafowl. Near protected areas, the situation is slightly different, since most PAs are near the Aravalli or Vindhyan hill ranges, where groundwater is available for irrigation. In such areas, monsoon crops, such as millet or bajra, have become secondary, as the market demand for these crops has decreased, so people grow them mainly as fodder for livestock. The primary crops nowadays are wheat and mustard. When the dry deciduous forests start to dry up after the monsoon, wheat fields entice the ungulates to raid them. This was not the case three decades ago, when the availability of electricity and bore wells was an issue and as a result wheat fields weren’t as productive.

Recent Forest Department wildlife estimates show that while only 29,200 antelopes occur within protected areas, 3 times the number exist outside them. Similarly, jackals and langurs also have the same ratio in numbers within and outside PAs. This could be because 74% of the local communities in the state are vegetarian, which is far higher than the average (31% for all communities) in India, besides the fact that killing animals is also a cultural taboo in the state. There are few predators (primarily wolves and leopards) outside PAs in proportion to the high number of herbivores, which only worsens the situation as crop depredation continues. Free ranging feral dogs are the only predators in such landscapes, but they do not bring about a natural balance in the population of herbivores.

There is no crop compensation scheme in the state at present, so it is a difficult task to calculate tangible damage from crop raiding by wildlife. A very big step was taken to prevent crop raiding through the construction of walls around protected areas, but as wildlife also exists outside these PAs, this initiative did not work. On the peripheries of Rajasthan’s PAs, about 500 km stretch of up to 2 metre tall walls was constructed by CAMPA and World Bank funds, and MNREGA schemes. The cost of construction of these barriers might be in the millions, but the result is that while the barriers may have helped address the crop raiding problem, locals keep breaking the walls to illegally to graze their animals — the same breaches are then also used by wildlife. A study shows that in the 100 km wall around Ranthambhore, goatherds broke the wall at about 250 places to enter the forest for grazing. The wall may not be working as a physical barrier to stop illegal grazing or crop raiding, but it does serve as a psychological barrier to stop encroachment on the protected area, so a large group of forest officials are support this idea.

Fencing individual fields is quite possibly the only option, and the overall inclination towards fencing is rapidly increasing, but ultimately it will badly harm many species of wildlife outside the PAs. Natural fencing with thorny plants such as Ziziphus, Euphorbia, and Opuntia occupies a lot of space and takes time to grow, so people quickly lose interest in such fences, and so the conflict continues.

The livelihoods of the local communities of Rajasthan are primarily based on the rearing of livestock. In India, the state stands second in the number of heads of livestock – 577.32 lakhs, while it stands seventh with a human population of 744.88 lakhs. Most sanctuaries in the state face enormous biotic pressure due to livestock grazing.

The livelihoods of the local communities of Rajasthan are primarily based on the rearing of livestock. In India, the state stands second in the number of heads of livestock – 577.32 lakhs, while it stands seventh with a human population of 744.88 lakhs. Most sanctuaries in the state face enormous biotic pressure due to livestock grazing.

Livestock killing by big cats is considered to be a major issue relevant to rural livelihoods and conservation, because many carnivore species have been heavily persecuted as a direct result of elevated conflict levels with communities. In most places, the Forest Department provides compensation to the community when a predator kills their livestock; however, there are several problems in the process and its implementation. In 2015, more than 400 livestock kills were compensated by the Ranthambhore Forest Department. Most livestock are killed by leopards.

Tiger Watch Ranthambhore conducted a study in Ranthambhore, which revealed a shocking difference in compensation cases and actual kills made by predators. Out of 10 different ranges, we collected data on kills from 3 different ranges, which revealed that the majority of livestock killing incidents go unreported in these ranges. Only 5 out of 119 livestock predation incidents actually received livestock compensation from the Forest Department! There are three major reasons to not report such cases: the livestock was taken into prohibited areas for grazing; the process of reporting is complicated; and the process is time consuming, so many a time, the villagers feel it is easier to just terminate the predator themselves.

Leopard: According to the Forest Department, around 600 leopards exist in the state. There are 25 wildlife sanctuaries and three national parks in the state, and most have populations of leopard, except those in the desert, e.g., Tal Chhapar and Desert National Park.

Efficient rescue teams based out of five cities (Udaipur, Jaipur, Jodhpur, Kota, and Sawai Madhopur) in Rajasthan cover almost the entire state for rescuing various problem animals. These five teams have rescued 200 leopards in the last 10 years (incidentally, 400–500 leopards are rescued in the neighbouring Gujarat each year). The 200 leopards in Rajasthan, were rescued from human habitations, agricultural fields, deep open wells into which they fell, or from the clutches of snares or jaw traps laid by poachers. Two interesting patterns have become apparent, the first is that leopards have been dispersing from the Aravallis, and some are moving towards the desert areas, as evidenced by rescues from places as far as Chauhtan in Barmer, Nagaur, Hanumangarh, Churu, and Jodhpur. Historically, the desert areas did not have leopards. Most of the rescued animals were males and they were likely exploring new ranges. Jaipur-based veterinarian Dr Arvind Mathur rescued 46 leopards, out of which 43 were males. There are 4 districts in which quite a few human beings have been killed by leopards: Pratapgarh, Dungarpur, Rajsamand, and Alwar. In the last 15 years, as many as 30–35 humans were killed by leopards in these 4 sites.

The Forest Department took a proactive step this year by launching Project Leopard, Rajasthan being the first state in India to launch this project. Project Leopard may sound like it is meant to increase the population of leopards in the state (as was the objective of Project Tiger), but this is more of a project to conserve leopards by improving their prey base, mitigating conflicts with humans, and eliminating poaching.

Sloth Bear: Forest Department records state that a total of 900–1,000 Sloth Bears exist in the state. Around 70% of the wildlife sanctuaries of Rajasthan have Sloth Bear populations. There are several forested areas in the state outside of the protected areas where they are also found. Even though they are present in various parts of the state, sloth bear conflict is disproportionately concentrated around Mt Abu. Every year, 6–7 people are badly mauled by sloth bears and most of the victims are local community members. Mt Abu is a hill station with hundreds of tourism facilities, and thousands of tourists who irresponsibly throw garbage around, which attracts sloth bears to human habitations. Mt Abu gets a large amount of money from tourism, and in order to reduce the conflict with sloth bears, priority should be given to address the problem of garbage dumping in this hill resort.

Rajasthan has lost 96% of its historical range of tiger distribution, and tigers are now confined to the Ranthambhore and Sariska tiger reserves. Since the declaration of Project Tiger in 1973, 15 humans have been killed by tigers in Ranthambhore. Of these, 11 were killed inside the reserve, and 4 close to the periphery. A large and vibrant economy generated through tiger tourism has resulted in strong local community groups actively supporting tiger conservation, and along with timely compensation of livestock kills, public anger towards tigers is reducing.

A Point to Ponder

Relations between humans and wildlife changed when humans stepped up their trophic level in the food chain due to their intelligence, the use of fire, development of lethal tools and weapons, and formulated social bonds for mutual support. They then took over as intelligent super predators and created a landscape of fear for other species. After attaining super status in the food chain, we need to take the responsibility to manage our ecosystem rationally, and we have to learn to live with animals. Our irresponsible actions on the planet are threatening not just wild animals but our very own existence.